Chat
IRC channel #hal9k at Freenode. You can use Freenodes web-chat in your browser.

The idea will be to build a skeleton, then add a camera, then add propels and steering. It would also be really cool to add some form of sonar, this can probably extend the range of the underwater “vision”? A depth gauge is almost mandatory, then there should be a switch to make the robot automatically maintain the current depth (using the depth propeller).

Additional features, too cool to think about ATM:

The more the merrier; please sign up if you want to help with the project.

The most common seem to be using bilges and converting to propellers.

We can buy the propels here: http://modelskibet.dk/group.asp?group=28

It is suggested to use a H-bridge configuration with PWM (Pulse Width Modulation) to enable precise control of the thrusters. The H-bridge (L298) is driven by a PWM signal on its EN pins and the direction is controlled via its IN1 and IN2 pins. An Arduino is used as controller together with the small potentiometer-Joystick we have at the hackspace

On Sea Perch they use Arduino as controller and the MXP4250 by Freescale, as presure sensor. We should be able to get two free samples from the webpage of Freescale. It is also available on Elfaelektronik.dk, where then the price is at 130DKK.

UPDATE: We now have a MXP4250GP, thanks to Flemming!

Both from water and from the pressure. One solution is to build a air-tight water-proof box, but then there is the pressure to worry about. Maybe it is easier to coat the PCB's in “lak”, as done by some overclockers when they watercool?

Interference on the cable

We will probably run both analog (camerafeed) and digital (steering, comm.) through the same, quite long, cable. Maybe we need to go to CAT6? Or two parallel cables?

It quickly gets dark underwater, some form of preferably quite strong lighting is required.

Stuff (cable, nastyness, etc.) in propeller = stuck robot. Maybe a form of “gitter” will do, but it might reduce the effect of the rotors as well.

Air in the skeleton pipes

The skeleton pipes should probably be airtight, to not increase the weight of the robot dramatically. This should also give the robot “updrift”.

The robot should be kept upright. The standard solution seems to be to have two “pølser” of light material (pvc pipe, plastic foam).

Randall Munroe (xkcd) seems to be doing without. 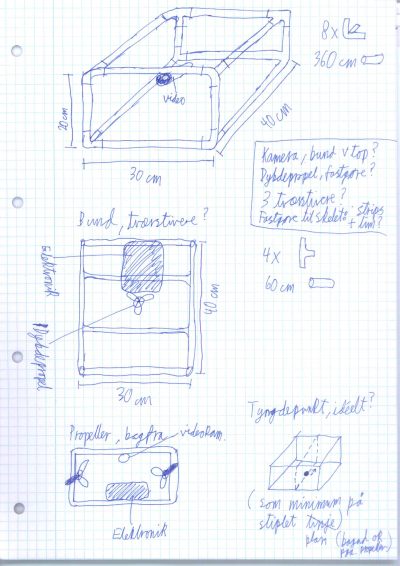 Initial design is to have an Arduino controlling the motors onboard, communicate with it over RS485 with a laptop.

Initial GUI can be found at Leo at Launchpad. The software is naturally named “Leo”.

Pictures from the building process

Except where otherwise noted, content on this wiki is licensed under the following license: CC Attribution-Share Alike 4.0 International
oeffentlich