Chat
IRC channel #hal9k at Freenode. You can use Freenodes web-chat in your browser.

this idea come from a site that build home wind turbine from cheep materials and stuff that was taken out from other machine. from this weary god drawings Link that illustrate whare to cut the wings.

after the dammage the storm in nov 2011 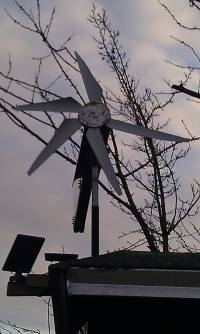 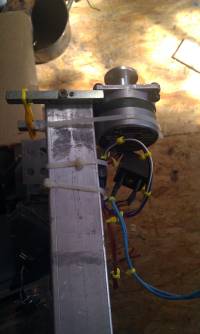 the knob in ALU from scrap ALU plate
2013 .okt after Longtime I decided to invest in a PRO windmill 60watt, in the .okt storm ti fell of and broke the blade ring, so I clip the other site site off. but it make less power then my own design,

2014 .sep so the status is to build a m/s power inverter to my 24Ah lithium battery (LiFePo4). and maybe high pole to get it over the tree limit. I also looking foreword to make more efficient windmill blade and hub.

2015 April the next step is to make sure the windmill and the converter not drain the battery while the is no wind. therefore I will make an detector to see when the windmill has much power to charge, if not some relay will cot the power line from windmill to the battery. I have also get more Battery to my Battery bank so it has more power to my Car battery converter. The big challenge is that the construction have large voltage range to work on and not use only little power so the windmill will not stop.

I have also Looked at the solar dev. open source platform ElectroDacus

Just for fun create a Wing design, with 3 circle design Thingivers test and not for printing, only for view how it will look after assembly, to make it with test material,

Except where otherwise noted, content on this wiki is licensed under the following license: CC Attribution-Share Alike 4.0 International
oeffentlich